Get fresh music recommendations delivered to your inbox every Friday.
We've updated our Terms of Use. You can review the changes here.

from No Regrets by Pep Love w/ Del the Funky Homosapien 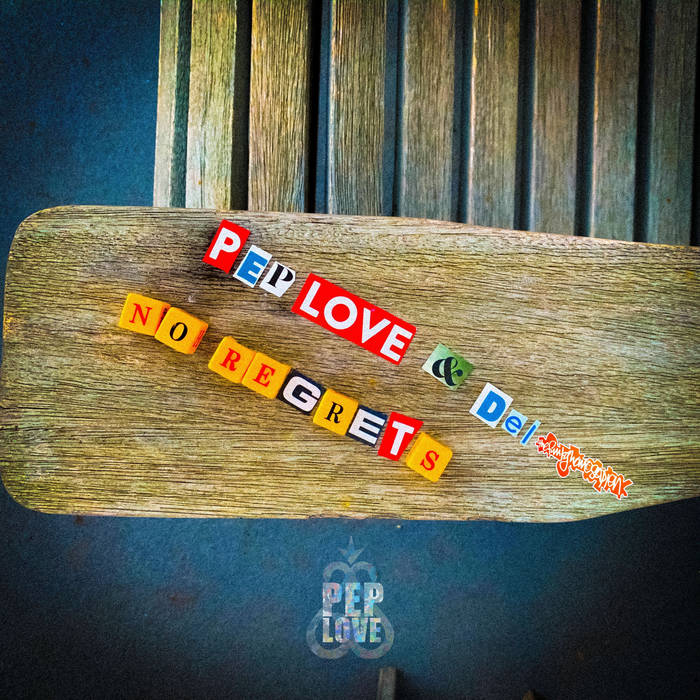 Jazzy vibes and hard hitting drum breaks with lyrical wizardry combined. Songs sometimes come together effortlessly to weave unintended tapestries. But whatever the outcome may be we accept and continue on in peace as we should all strive to in life. Especially in a day and age where consensus as to what may be right or wrong, true or false is as tenuous as ever could be. What's said in a song explains itself to the sayer as much as it does the audience. So let the good word sound power light the way to find that everything is right and well as it should and only could be right here in this moment that we're in altogether now.

I'mma ace in a hole on a stroll
I know the ways and the roles in the ratio
of my circumference
But fuck the dumb shit
We ain't risin' to the top just to plummet from the summit
to the drop
So I'm knowin what I am and what I'm not
I'm a man and standin' on the planet rock
God damn it!
Why should I not have top notch standards
Tryin to get a handle on it
when it didn't turn out the way that I planned it
The natives is restless
they actin outlandish
In the end when the money go and the clout vanish
the faded into indigo
and the crowd disbanded
In countless amounts
Stranded without a house
While the world keep goin around and around
Shit changes
in ways that are the strangest
in a wide array of patterns and arrangements
That's just the way it is

Muthafuckers get some money and start trippin
off the fourth floor or the net
catch the victim
Double that
Bet on the outcome prediction
Like the lottery and the odds'll be against em'
Can't be a star
Stars ain't on the ground
That's where we meet where its beef by the pound
Musical chairs
Every seat go around
between the elite
Complete with a crown
Dzl'lI put the power in the engine
Cowards get suspended off a tower and they tremblin'
Horror
Terror
Panic button he pressin'
Upon release of his breath he catch it.
Back on the street with his messy method
Upon release with a strike his second
In Armageddon
armed with weapons
paranoid wondering would karma get him
cheeyeah...

from No Regrets, released November 6, 2020
Written by Pep Love and Del the Funky Homosapien
Produced by Pep Love
Mixed by Deegan "Mack" Adams for DMA Audio
Mastered by Justin Weis at Trakworx Mastering and Recording
Cover art by CoOpt

Pep Love resists not himself nor the external forces. Thats why I fly. Inside my MPC I go and out of my mind I return.